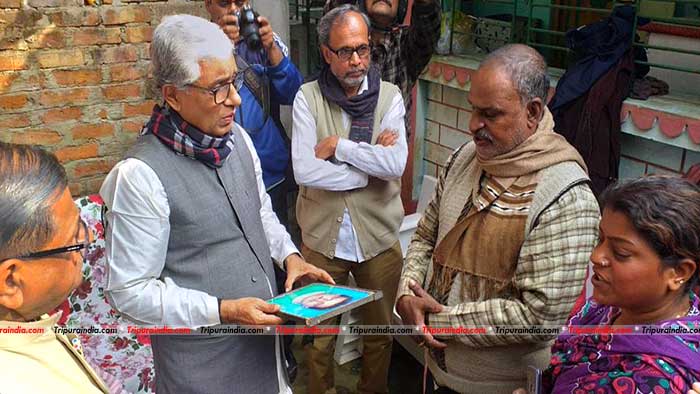 Former Chief Minister of Tripura and incumbent leader of the opposition Manik Sarkar today sought to judicial inquiry in the unprecedented death case of Sushanta Ghosh, who had been recovered dead from the lavatory of West Agartala police station’s lock-up. The opposition leader also held the police department responsible for his death and claimed that due to such incidents, people are losing hope in the state police department.

The opposition leader, who paid a visit to the bereaved family of Sushanta at their residence, also questioned police’s credibility at par with rising incidents of crimes. “The death occurred in the custody of police and now it is their duty to answer the as to how it happened. But, in view of the deteriorated law and order situation it can be easily ascertained that there is no rule of law in the state and people are losing their hope on the state police” he said.

A very similar incident, he referred, took place at Udaipur few days back. “I personally wrote to the Chief Minister asking for a judicial inquiry then. A magisterial inquiry has been ordered than also but unfortunately, people know nothing about the outcome,” he claimed.

He also expressed ambiguity as to what much could be done with the inquiry ordered by the state government. “The government should at least order a magisterial inquiry. The government cannot keep silent on such grave matters like deaths after deaths in lock-up. The police’s inability is ostensive and gradually it is reflecting the government’s inaction” the former Chief Minister added.

Along with him, a batch of CPIM state leadership visited his house.