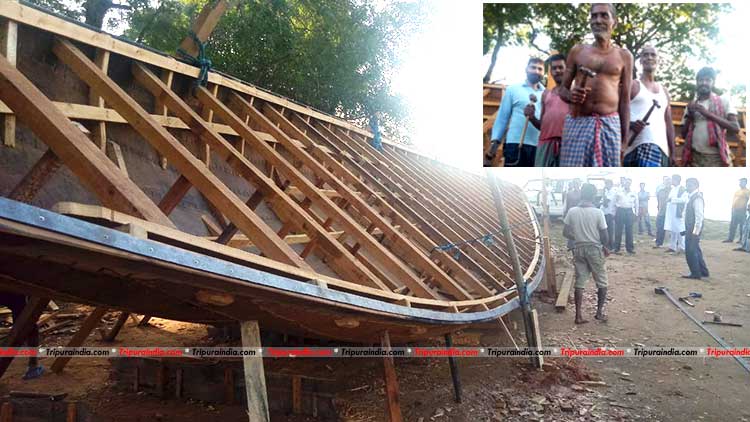 In a move to attract more and more tourists at Neermahal, the state’s only water palace located at Melagarh; Rudrasagar Udbastu Fisherman Co-operative society has taken a step to prepare state’s largest boat in order to ferry tourists from Rajghat to the Neermahal. The Boat, which is expected to start its operation through the waterway from December this year—the month from when the tourist footfalls recorded the highest.

“Every year, tourist footfalls increase in from mid-November and remain the same till February. And, if the boat starts ferrying tourists from December this year, the tourist footfalls are expected to get a rapid augment” said a vendor of Rudrasagar market stalls.

Speaking to this news person, Secretary of the co-operative society, Parmeshwar Das said, the purpose of making creating such a boat is just to boon the tourism sector of Rudrasagar—the main attraction of the reason. According to the co-operative members, tourism is the main source of income in this area apart from cultivation and fishing, although, the cultivation is largely due to the Tripura High Court’s verdict to maintain a certain level of water in the lake.

“As of our knowledge, after Rudrasagar, Dumbur is the largest lake in Tripura. And, there are no such boats there like what we are making here. The boat, which is being constructed in the banks of the lake is 65 feet long and has a breadth of 11.f feet. The seating capacity will be 200 persons per trip” Das told this publication.

70 years old Dulan Chandra Sutradhar, an expertise carpenter in boat making who has tied about 5,000 boats in his life is the head of the carpenter team working in the boat. Speaking to this newsman, he expressed that this piece of work would remain the finest works he had done in his career. “What all I can say is this is the biggest project of mine. This piece of work will remain as one of my biggest achievements” he added.

The six members' carpenter team which is working on the boat has almost completed their work. “Now, if the remaining works like roofing, seats, and electrification are done the boat will be ready to ferry passengers. This will take some time—perhaps a few weeks” Das said while inspecting the work.

When asked about the spending, he said, the total spending on the boat is Rs 10 to 12 lakh. The decision has been taken by the co-operative society in the annual budget of the year 2019-20, he added. According to the budget proposals, Rs 10 lakh has been allotted to put up the new boat. Apart from this, a number of new initiatives have been also passed in the budget session which includes—increase in the honorariums of the employees, awarding the students who passed board exams with distinction and carrying out developmental activities if the markets—Ananda Bazar and Kajal Market which fall under the control of the society.

“Despite the paucity of funds and a huge burden of debts, we are trying our best to explore the best possible way to develop Rudrasagar. We have increased the honorariums of the 45 employees who work for the society. The old committees have left a burden of Rs 1,08,05,633 to the new committee. The first resolution that we have taken up is not to take any more loans from government concerns. Now, we are trying to repay the loans and small steps to improve the revenue generation system” he added.

The main sources of revenue of the society come from boat sail, permits, Ijara, Tahsil wing, rents from the markets and parking fees. Every month the society earns a handsome revenue from separate wings is has and now they are trying to boost up the revenue generation so that in future the premier tourist destination can run on its own.

Presently, the society has 13 boats including watchmen boats. Only recently, a flying jetty has been set up in Rudrasagar under Swadesh Darshan scheme.