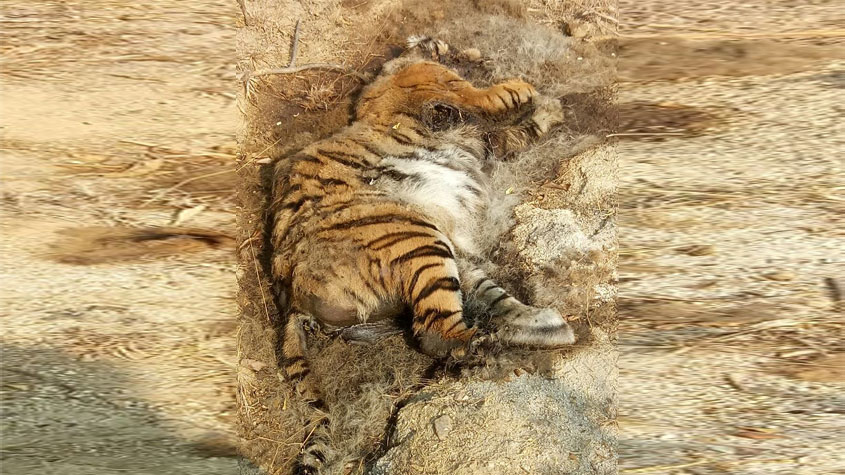 In the first reported incidents of 2018, a tigress was killed in retaliation by poisoning and its paws harvested as loot by villagers in Madhya Pradesh's Seoni district, while another tigress died in an unusual battle with a male at Kanha National Park, in the state, officials said.

According to officials, a 5-6-year-old tigress was hunted down by four villagers in Sonkhar village under Bhargat division of Seoni district on January 13.

The culprits later chopped off all four paws using an axe and also harvested its canines and whiskers.

They were arrested on Sunday and the loot was recovered with help of a dog squad, officials told IANS.

The tigress among many other such free-ranging felines lived outside the national park in Kanha-Pench forest corridor, dotted by several villages.

"We have confiscated all the articles with the help of dog squad. Three people have been remanded to know the purpose of the hunt and two others sent to jail," J.S. Bhargava, Divisional Manager, Barghat Forest Division, told IANS.

Officials said the culprits poisoned a cattle carcass and used it as bait to kill the tigress. The bovine had been killed by the tigress earlier, which angered the villagers.

"Cattle death is compensated quite well. The region does not have much productive cattle and government compensated maximum Rs 25,000 on one kill. Yet they hunt the tigers and in this case harvested the body," Nitin Desai, Director Central India, Wildlife Protection Society of India (WPSI) told IANS.

Desai said that animal parts are often used as amulets and considered to bring good fortune by some villagers, a possible theory behind the harvesting of its paws and teeth.

However, officials are still sceptic.

"It is unclear, and possibility of a nexus of wildlife trade can not be ruled out. Poaching in such a manner raises doubts. We are investigating the matter," Bhargava said.

The conservationists see the killing as a great loss, as a single tigress gives birth to about 15 cubs.

According to the officials, the battle was fierce as it was unusual, since a tigress and a tiger do not fight over territory and all other reasons of fighting were ruled out.

"The tigress T-83 had no cubs, so fighting P-56 to protect them is ruled out. Also the entire region has no hunting incident, so fighting over a hunt share was also ruled out," Sanjay Kumar Shukla, Field Director of Kanha Tiger Reserve, told IANS.

Shukla added that a case of cannibalism was also noticed as deep canine wounds in the tigress' body were found with sign of tiger P-56 feeding on her.

"We are still trying to understand. Tigers do show cannibalism in case of territorial fights and killing of cubs to mate with the female, but not usually like this," Shukla pointed out.

According to National Tiger Conservation Authority (NTCA), Madhya Pradesh lost 17 tigers in 2017 till October, later four others were electrocuted in December.