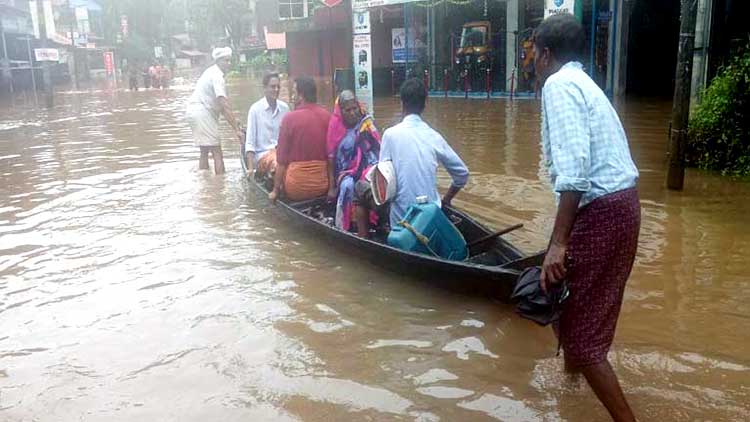 With rains still pouring down heavily leading to flooding across Kerala, 12 fresh deaths were reported on Thursday, taking the toll to 79, since August 8. More rains were forecast till Saturday.

Entire Kerala has been on a red alert since Wednesday evening. A total of 28 deaths were reported on the day.

Pathanamthitta district in central Kerala has been the worst affected in the last 24 hours as thousands of people -- students among others were trapped in their homes in Ranni, Aranmula and Kozhencherry.

Fishing boats from Kollam reached the flooded areas as the rescue operation with the aid of defence personnel continued.

Traffic on the national highway between Ernakulam and Thrissur has been regulated since.

Train operations between Ernakulam and Angamaly have also been stopped and at Thiruvananthapuram railway station tickets are not being issued.

All educational institutions were closed on Thursday. Situation in the capital district on Thursday improved as there were less rains. Water logging in low lying areas also receded.

The deaths on Thursday were reported from Malappuram, Kozhikode, Palakkad and Thrissur.

Parts of Ernakulam and Thrissur have been facing tough times with the dam waters from Idukki districts reaching Periyar, and its tributaries late on Wednesday.

In a first, the sluices of 33 dams across Kerala were opened on Tuesday, following incessant rains since late that day as the Met forecast more till Saturday.

The famed tourist destination in Munnar though continued to be in a bad shape, an official said.

The Sabarimala temple continued to be cut off by the river Pamba in spate.

The hilly district of Wayanad connected from Kannur and Kozhikode through a hill highway was badly hit with the overflowing Banasura Sagar dam waters creating havoc. Several landslides were reported in the area.

In Wayanad alone, more than 20,000 people have been put up in relief camps, authorities said.

The Cochin International airport was closed on Wednesday till Saturday as the Periyar river waters entered the operational area.

The airport authorities are worried about the flooding of the Rs 60-crore solar power plant -- one of the biggest in an airport spread over 45 acres. They fear about its working again.

The defence forces and disaster response teams have been putting up makeshift bridges and clearing roads in the affected areas in Kozhikode, Wayanad, Pathanamthitta, Ernakulam, Idukki and Kannur districts.

The heaviest rains and floods since 1924 have caused massive destruction, leaving more than 75,000 people in relief camps and damage to crops and properties that the state estimated to be over Rs 8,000 crore.