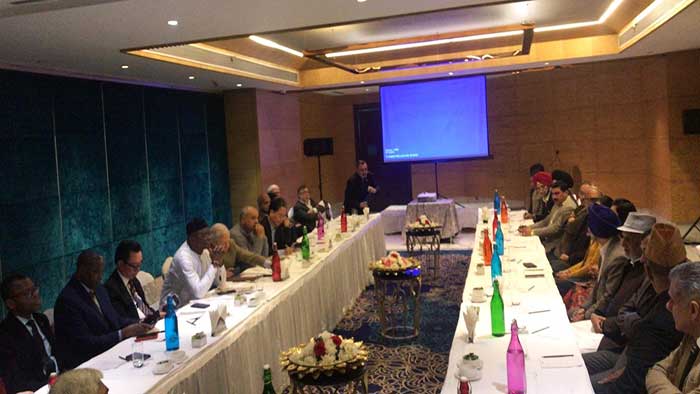 Foreign diplomats visiting the Union Territory of Jammu & Kashmir were on Friday reminded of the impact of Islamic terrorism by poster-bearing Kashmiri Pandit refugees on the outskirts of Jammu.

Fifteen foreign envoys, including the US Ambassador, are on a two-day visit to Jammu & Kashmir to personally witness the normalisation efforts taking place in the recently-formed Union Territory.

The residents of the Jagti Migrant Township held up posters proclaiming 'Free Kashmir from Islamic Terror' when the envoy team arrived.

The diplomats were scheduled to interact with a two-member team representing Kashmiri Pandits displaced from the Kashmir valley in the face of Islamic terrorism. The interaction with the displaced Hindus gave the foreign diplomats a first-hand look at the impact of Islamic terror in Kashmir.

Prior to visiting the Kashmiri Pandit migrant camp, the envoys had interacted with community and civil service representatives in Jammu.

This is the second team of foreign diplomats to visit Jammu & Kashmir after Article 370 was revoked and the erstwhile state was hived off into two Union Territories of J&K and Ladakh.