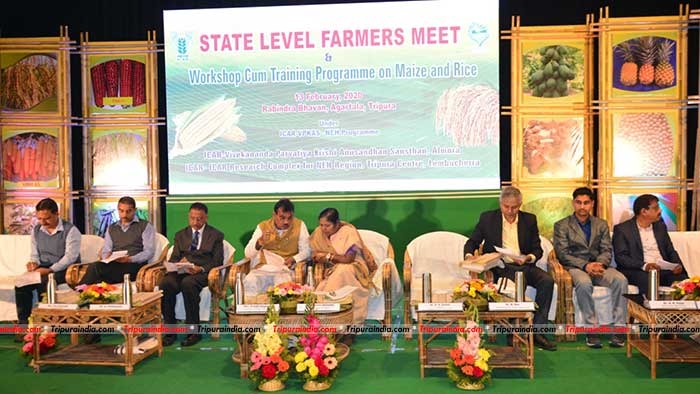 The Indian Council for Agriculture Research (ICAR) Tripura today organized a one-day farmers’ workshop in order raise awareness regarding the technical developments in the agri-sector and positives associated with multi-cropping system.

The workshop which was focused on paddy and maize, had been organized at Rabindra Shatabrshiki Bhavan Agartala in presence of MP Pratima Bhowmik and Tripura agriculture minister Pranajit Singha Roy.

Speaking on the occasion, Bhowmik Said, after 70 years of independence, Prime Minister Narendra Modi is the first prime minister who is trying to address the problems associated with agriculture. “None of the earlier governments took steps to solve the issues of farmers who feed us every day. Prime Minister Narendra Modi government for the first time introduced separate ministry for Jal Shakti and now contemplating to separate ARDD ministry in the Centre to facilitate the farmers of the country” She added.

Agriculture Minister Pranajit Singha Roy said, the government is eyeing to turn Tripura into a self-reliant state in terms of food. And, to do so a united effort should be put forth by all the line departments some way or the other associated with agriculture and allied activities.

“The government has already begun procuring paddy from the farmer across the country. But, the need of the hour is to increase productivity of our land. If everything falls in the right direction, the state government has planned to procure 2 lakh MT paddy from the state so that export possibilities to the food deficient states could be also explored” Roy added.

Principal Scientist of ICAR Tripura centre, SP Das, on the other hand exhorted the farmers to get well-versed about the technical developments and aspects of multi-cropping system.

“ICAR is wholeheartedly trying to develop good quality cross-breed seeds in order to enhance the agriculture sector facilitating the farmers. Some of the key seeds that are very good to be grown in Tripura soil are Gomati, Tripura Chikan, Khowai etc. The farmers should come forward to use these high productive species so that the state could achieve self-reliance as dreamt of” he added.

Senior agriculture scientist of the country Dr. A Pattanayak also attended the programme. Dr. Pattanayak interacted with the farmers during the technical session.

Notably, more than 1200 farmers from different parts of the state had been distributed seeds of maize and paddy. The connection between maize and paddy is also special in the sense as maize had been considered to be one of the least water absorbing produce so it could be easily planted in the hilly terrains and after paddy harvesting under multi-cropping system.