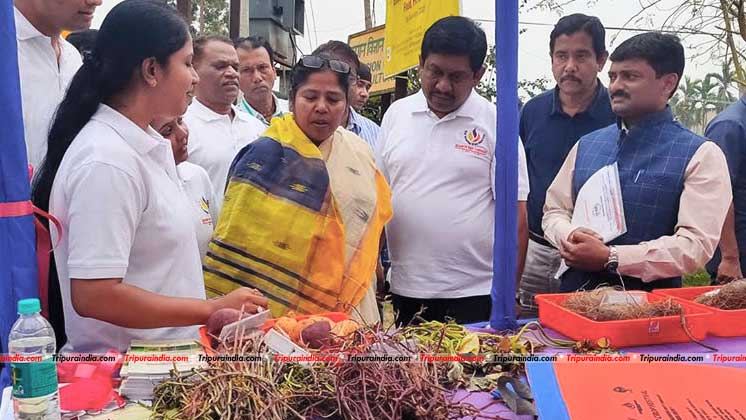 The ICAR organized a daylong workshop on tuber crops at Lembucherra for the farmers who were cultivating this type of agri-products. MP Pratima Bhowmik inaugurated the function. Joint Director of ICAR Agartala Biswajit Das informed media that a competition was also held and prizes were distributed. Other higher officials and senior scientific officers also remained present on the occasion.

“The tropical tuber crops are recognized as future generation crops. And, if cultivated in the calculated way, it can usher in a new dawn for the farmers. The attempt of developing seed villages in the state is a part of a greater plan of promoting these crops having huge potential of garnering multifaceted benefits” said Dr. Laxmi Narayanan, senior scientist CTCRI (Central Tuber Crops Research Institute).

Narayanan who visited Tripura during a daylong workshop organized by ICAR Tripura also added that there was a huge potential of increasing farmers' income through these crops in the NE states. “The CTCRI in collaboration with ICAR North East and KVKs (Krishi Vigyan Kendras) trying to give the traditional food items a mainstream identity. In that way, the traditional food consumed in the North-Eastern region will easily make inroads to the mainland India,” he observed.

One being asked on the shifting cultivation system and its impact on such crops, his associate Dr. Murugesan said, “The good part of the tropical tuber crop is that it is climate resilient and never gets spoiled due to extreme weather conditions. In North East, where most of the communities are doing shifting cultivation, this products have a huge potential to get grown”.

He also said that tuber crops like Casaba were largely cultivated in Garo Hills for local consumption. Similarly, the indigenous farmers for direct consumption are cultivating arrowroots, sweet potatoes yams and Tapioca in Tripura. But, the focus of project is to generate awareness among the people about the pros and cons of their produces and techniques of value addition, he pointed out.

The scientist’s team from CTCRI has also informed that there was an industrial aspect too. “If value added, the end products could be sold out in 10 times higher prices of the real product. The sweet potato costs Rs 20 to 30 a Kg in local markets but chips made out of these potatoes were sold out in Rs 200 to 300 per Kg” they told this reporter. Technical supports such as innovative species would be brought out after cross-breeding to fetch higher success.