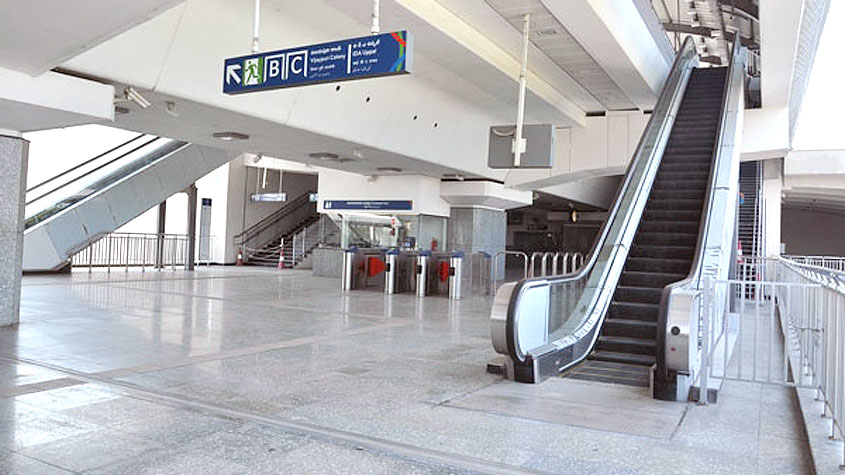 Hyderabad Metro Rail is ready to chug over the pillars erected on road median, changing the landscape of this tech hub and promising to take the city's public transport to a different orbit.

The long-cherished dream of the people of this historic city is becoming a reality as the first phase of nearly 72-km elevated metro project is all set to be inaugurated by Prime Minister Narendra Modi on Tuesday.

People can hop on to the world-class metro from Wednesday when 30-km stretch from Nagole to Miyapur will be thrown open for commercial operations.

Billed as the largest metro project in the world in Public Private Partnership (PPP) mode, the project which was once on the brink of collapse is finally coming to a reality.

In a city notorious for congestion and traffic jams, people now hope to get relief at least on the stretch connecting Uppal, a burgeoning suburb in the eastern part to Kukatpally, a densely populated neighbourhood near IT hub Hitec City in Western Hyderabad.

"What makes Hyderabad Metro different is the way metro stations have been designed. These stations are completely open. Look at other cities, they are tunnels. Our stations are not supported from bottom and are cantilevered. Thus we utilised less land," he said.

Another key feature will be the integration with other modes of transport like buses, taxis, auto-rickshaws and even bicycles to ensure end-to-end connectivity.

The project saw many ups and downs since L&T won the bid in 2010 to build the 71.2-km elevated metro on three corridors.

It achieved financial closure for Rs 12,674 crore while Government of India was to fund Rs 1,458 crore under Viability Gap Funding (VGF).

Many including India's metro man E. Sreedharan had doubts whether the project in PPP mode will ever take off.

"It was a huge challenge as only four metros in the world were making money. We have defied logic with Indian capabilities," said N.V.S. Reddy, Managing Director, Hyderabad Metro Rail (HMR) Limited, the government body monitoring the project

Hyderabad Metro was conceived as financial innovation with VGF and the concept of Transit Oriented Development (TOD). The concession agreement provides for 18.5 million square feet of real estate space across the 269 acres allotted for three depots and 66 stations.

The L&T holds the concession for 35 years, extendable by an additional 25 years.

The project was designed to carry 14 lakh passengers per day. The developer expects 50 per cent revenues from ridership, 45 per cent from real estate development and five per cent from advertisement.

The construction could start in 2012 but the movement for separate statehood to Telangana had put a big question mark on its future.

When Telangana was carved out as separate state from Andhra Pradesh in 2014, L&T was concerned that the project may not be viable in post-bifurcation Hyderabad.

V.B. Gadgil, then chief executive and managing director, LTMRHL went on record in September 2014 that the cost had escalated by Rs 2,500 to Rs 3,000 crore.

A letter from the developer to the government allegedly threatening to walkout of the project was leaked. Later, both agreed to sort out the issues through talks.

The original construction period ended in July but due to the delay the government granted 17 month extension.