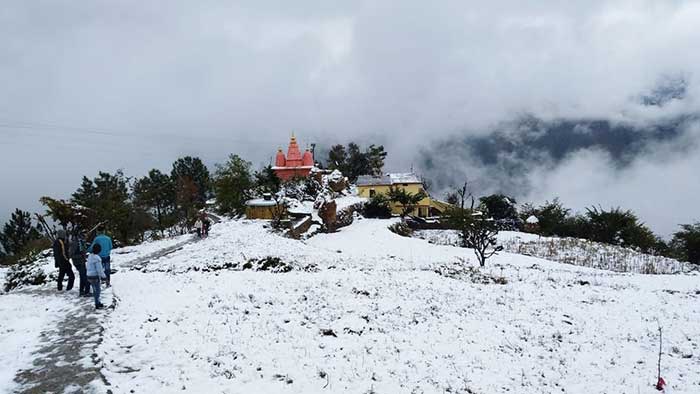 More than 900 villages of Uttrakhand are without electricity and water as unprecedented heavy snowfall has disrupted normal life in the state over the past few days.

An official of the state government said: "The electricity and water supply is disrupted in more than 900 villages and 50 tourists are stranded in a number of places due the closure of roads. Traffic is blocked on around 100 highways across the state."

With roads turning slippery traffic movement has come to a standstill in the upper reaches and administration is trying to fix things.

The officer further said that there is a risk of accidents due to frost in the place on Kempty Marg. On the same route, vehicles can go up to near the Gurudwara. Sate roadways buses coming from Dehradun to Mussoorie Picture Palace have to shorten their routes.

Ritesh Rawat, a resident of Chamoli said: "Snow has disrupted the supply of electricity and water almost every year. But this time around it has been for a longer stretch, without any kind of respite in sight."

This problem is more common in the villages on the higher reaches.

According to an official, there are about 950 villages in Chamoli, Pauri, Tehri, Uttarkashi and Rudraprayag districts of Garhwal division where electricity supply is disrupted. Apart from this, there is a drinking water crisis in more than 450 villages. In most villages, people are drinking water by melting ice.

Amar Maurya, a resident, said that due to heavy frost accumulation the entire area has turned dangerous as the terrain is not clear. This is causing a lot of trouble.

According to the police, a car slipped after hitting a pothole and losing balance. This happened due to the frost on the road near Patisain Bazaar in Pauri district, injuring five people on board.

In New Tehri, 32 people have been injured in different areas.

After the snowfall in Auli, the Joshimath-Auli route is closed and more than 20 tourists are stranded with their vehicles. There are landslides and rock fall reported from Lambgarh on the Rishikesh-Badrinath highway constantly.

Rains have increased in remote areas of Nainital, Bageshwar and Almora of Kumaon division promising to bring down temperatures further.

Bikram Singh, director of the Meteorological Centre, said the skies will remain clear on Saturday and Sunday, but from January 13, the weather may change once again.

The Met forecast frost in the plains especially in Haridwar, Udhamsingh Nagar in the morning and night. Hailstorm is expected at some places in Dehradun, Haridwar, Pauri, Nainital, Udham Singh Nagar on January 13.

The Disaster Management has issued alert across the state.