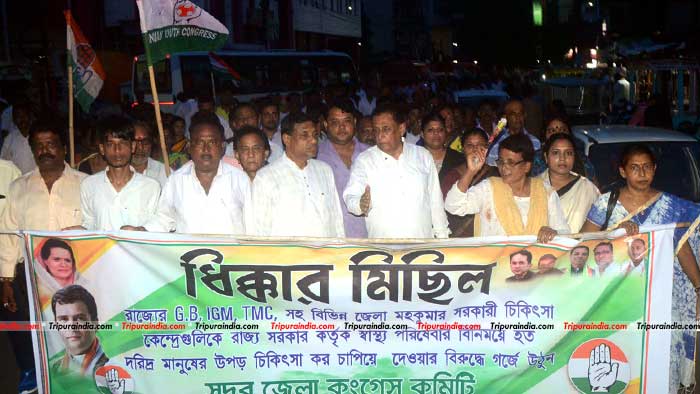 Tripura Pradesh Congress President Pradyot Kishore Dev Barman has on today proposed for an all party discussion to ensure a rethink by the state government on imposing new tariffs on health related services in the state.

In his message, he said, instead of providing quality health care we are denying basic health care to the people of Tripura. I propose that as opposition we must demand an all party discussion on how to ensure that there is a rethink by the state govt.

The healthcare, he added, in the previous govt was in shambles, we should be upgrading the system and making sure that medicines, doctors are available round the clock instead of simply putting a fee on the poor patients. Health care under govt should be obligatory to the citizens of the state. I appeal to the govt to listen to the voices of opposition we also have a view, kindly as a democratic govt listen to us, Pradyot wrote on his official social media handles.

On the other hand, the Congress party, as declared earlier, took to the streets against the government’s move. All the senior Congress leaders including Vice-President Pijush Biswas, former MLA Gopal Roy, Congress leaders Subal Bhowmik, Youth Congress President Sushanta Chakraborty, working President Pujan Biswas and activists from NSUI participate in a protest rally this evening.

Meanwhile, veteran Congress leader and General Secretary of the state party unit, Prasanta Sen Chowdhury and a team of Congress and Mahila workers state a demonstration in front of the GBP hospital. Party sources said, similar demonstrations and protests were also staged in all the district headquarters also.