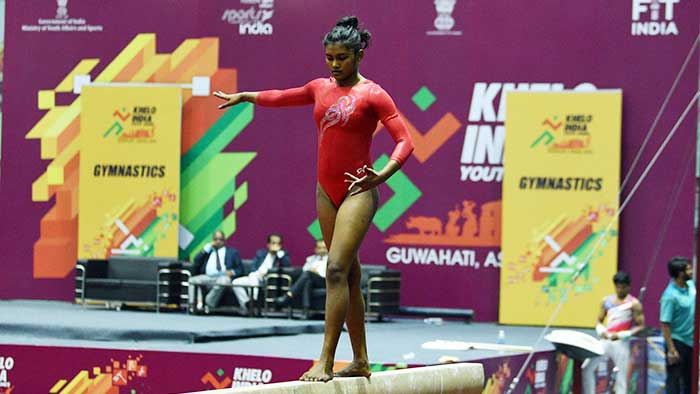 Priyanka Dasgupta, hailing from Dipa Karmakars home city of Agartala in Tripura, grabbed the spotlight on Day 1 of the gymnastics competition, clinching the Girls Under-17 All-Around crown in the Khelo India Youth Games 2020 here on Friday.

Similarly, Jatin Kumar Kanojia carried the flame for Uttar Pradesh, claiming the Boys Under-17 All-Around gold with a measure of comfort.

Asmi Ankush Badade and Shreya Pravin Bhangale made it a 1-2 for Maharashtra in the Girls Under-17 rhythmic gymnastics all-around competition but it was the self-taught Upasha Talukdar who captured the hearts of the capacity crowd by winning bronze, Assam's first medal in the Games.

Maharashtra's Maitreyi Amit Selukar and Nishka Chintamani finished higher in the ranking than Upasha Talukdar, who learnt her routines by watching videos online. But since the rules allow only two athletes from a state to win medals in a gymnastics event, the Assamese girl was awarded the bronze medal.

The Haryana duo of Sachin Gupta (671) and Sunny Kumar (665) topped the Boys Under-21 Recurve archery qualifying round on a day when Andhra Pradesh's Kundru Venkat (699) and Rajasthan's Priya Gurjar (686) earned the right to be ranked first in the Under-17 Compound boys and girls events respectively.

Coming from a city known for its gymnastics tradition dating back several decades, 15-year-old Priyanka Dasgupta, nailed the Girls Under-17 All-Around gold medal with a total of 42.60 points, improving on the 42.05 that West Bengal's Protishta Samanta had secured in winning gold last year.

Daughter of a driver, Priyanka Dasgupta learnt the ropes at the Vivekananda Byamagar in Agartala and, despite holding promise, missed out on a podium finish in Pune by a mere 0.05 points after an unsatisfactory show on the uneven bars. She ensured that there would be no slips-up this time, completing her routines with aplomb.

The 14-year-old Jatin Kumar Kanojia, who was 13th in the Khelo India Youth Games in Pune last year but won gold on the parallel bars, was confidence personified as he ensured that the All-Around title won in 2019 by Mohammed Rafey was emulated. In fact, he scored 68.90 points, a shade better than his predecessor.

Delhi's Tushar Kalyan became the only one to complete a hat-trick of All-Around medals in Khelo India Games when he moved up a rung from last year to take the silver, stopping an Uttar Pradesh 1-2 in the event. He had won bronze in the Khelo India School Games in Delhi in 2018. Jatin Kumar Kanojia's state-mate, 14-year-old Saref Khan, took the bronze.

Competitions got under way in kabaddi, volleyball and table tennis while athletics, judo and shooting will begin on Saturday, with a number of medals up for grabs.