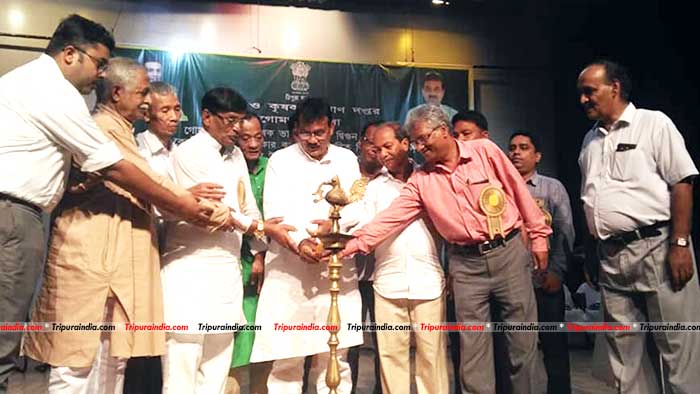 In an attempt to assist the farmers of the areas, most venerable to flood and other natural calamities, the state government has decided to insure their crops free of cost.

Speaking at a programme today, Agriculture Minister Pranajit Singha Roy Said, the government of Tripura has identified 21,500 hectare of cropland as “High Risk” zones where every year natural calamities cause huge losses to the farmers. The state government has decided to insure crops of those lands under Pradhan Mantri Fasal Bima Yojana free of cost so that no farmer will be left incurring losses in the next season, he added.

The agriculture minister, who inaugurated a workshop and awareness camp on Paddy procurement at Rajasrhi hall, also said, this initiative would cost Rs. 3 crore 17 lakh for the government. And as of now, altogether 504 farmers of Gomati district have been provided the insurance policies. Speaking about the paddy procurement drive initiated last season, he said, the main aim of the government is to double the farmers income by 2022. Thus, the paddy procurement drive was started here in the state for the first time since the new government took the charge. Last year, 10,400 metric ton paddy was procured by the FCI and this year also the limit has been decided of 10,000 metric ton, he told the gathering.