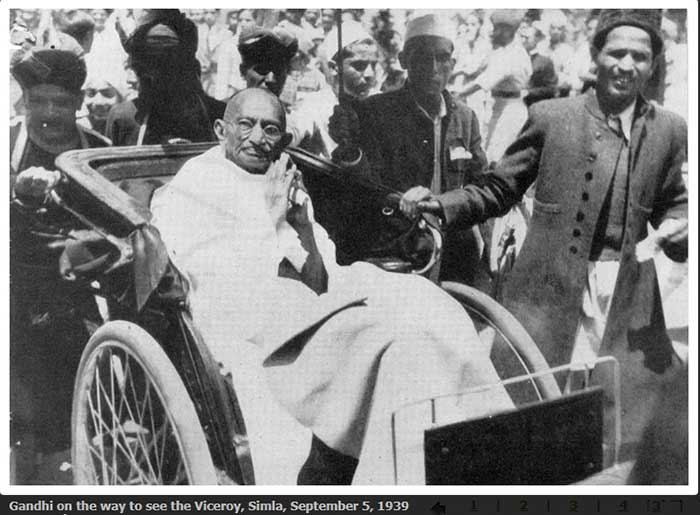 If the story of Gandhi becoming 'Mahatma' began in Bihar's Champaran, it reached its crescendo in the state's Bhagalpur district, where he united the people for the freedom struggle.

Mahatma Gandhi arrived in Bhagalpur via Saharsa and Bihpur in May 1934 to oversee the earthquake relief work being carried out by the Congress. He stayed at the residence of barrister and freedom fighter Deep Narayan Singh and in his address at the town's Lajpat Park appealed to the people to support the relief efforts.

Gandhian thinker Kumar Krishnan says a lot of people present at the gathering wanted Gandhiji's autograph, and he obliged them by charging Rs 5 for each signature. The money collected was donated to the quake victims.

The house where Gandhiji stayed is a heritage structure and was converted into the residence of the Bhagalpur District Magistrate after Deep Narayan Singh donated it to the government post independence.

Interestingly though, this wasn't Gandhi's first trip to Bhagalpur. He had first visited it on October 15, 1917 to preside over a conference of the Students' Association of Bihar in Kathalbadi area.

Hindi was the focus of the conference and addressing it, he termed "Hindi the language of masses". "By making me the President and allowing me to address the conference and conduct its working in Hindi, you all have shown your love for me," he said. Sarojini Naidu's speech in English was published after being translated in Hindi.

Gandhi next came to Bhagalpur on December 12, 1920, when he addressed a gathering at Tilha Kothi. An organising committee was made to organise Gandhi's conference. Deep Narayan Singh, Shubhkaran Chudiwala, Pandit Mewalal Jha, Gajadhar Prasad, Shrihar Narayan Jain and Bodh Narayan Mishra were the members of this committee.

Gandhi was next in Bhagalpur on October 2, 1925 as a guest of Kamleshwari Sahay at whose residence Shiv Bhavan, he celebrated his birthday.

At this celebration, he appealed to the women to renounce 'parda', spin 'charkha', wear khadi, educate their daughters and boycott foreign clothes.

He also addressed the provincial conference of the Bihar Aggrawal Mahasabha. Seth Jamna Lal Bajaj and Banarasi Prasad Jhunjhunwala, who were present in the conference, were given the responsibility to promote khadi.