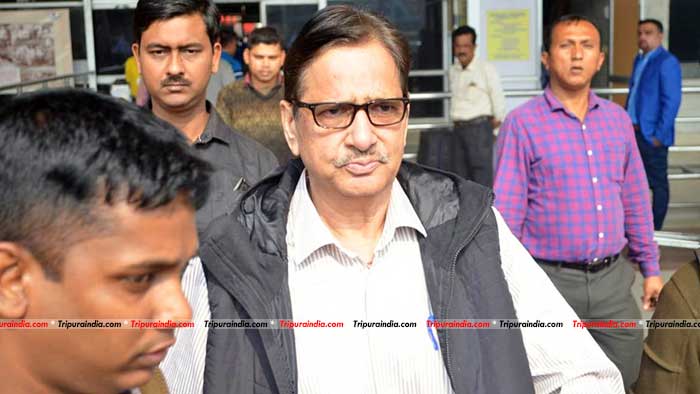 Special Public Prosecutor Ratan Datta said the Special District and Sessions Judge Sabyasachi Datta Purkayastha ordered three more days of police custody for Singh who was brought here by a Tripura police team after getting his transit remand on Tuesday.

"The former Chief Secretary would again be presented before the Special District and Sessions Judge on February 24. Some important files related to the multi-crore PWD scam are missing. The police during the three-day custody would interrogate Singh to know more details about the financial bungling," Datta said.

Singh was state Principal Secretary (PWD) during 2008-09 when the reported misappropriation linked to the implementation of various projects worth Rs 638 crore had taken place.

Both Choudhury and Bhowmik were granted bail by the Tripura High Court a few weeks ago after their arrest on October 14 and October 21, respectively last year.

The case has rocked Tripura politics in the past six months. According to Law and Education Minister Ratan Lal Nath, the Public Works Department under the previous Left Front government in 2008-09 had clubbed together 13 projects -- five bridges, five buildings and three road projects -- being implemented at a cost of Rs 638 crore on cost-plus norms.

Terming it as the "biggest scam in the history of Tripura", Nath said Rs 164 crore had been siphoned.

"No corruption took place during the 35-year rule (1978-1988 and 1993-2018) of the Left parties in Tripura. Instead, state infrastructure and all other sectors improved in the state," Sarkar said.