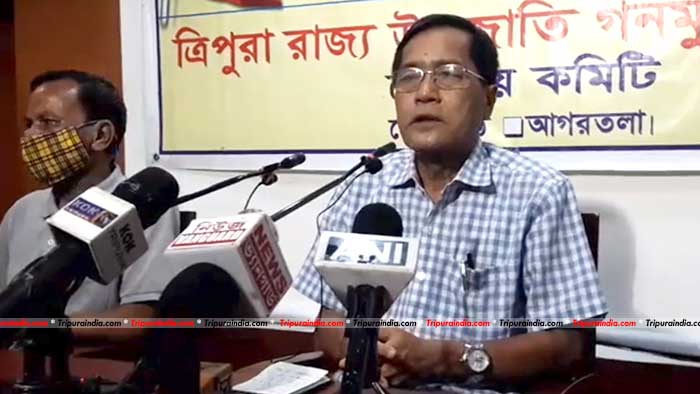 After biting dust in the last assembly elections, the state unit of CPIM rose back to fight the Lok Sabha polls on their own. Keeping no surprises, the party once again showed confidence on Jitendra Chowdhury for the ST reserved East Tripura Lok Sabha constituency. The veteran Communist leader, who had completed his first term in office as an MP followed by two terms as Minister in the state cabinet, once again nominated by the party and too at a point of time when it is a fight of existence for his party.

In an Exclusive Interview with the Tripuraindia.com, Chowdhury claimed, in just one year the association of anti-left powers that emerged before the Assembly elections has broken into pieces giving the CPIM a golden opportunity to script victory in the forthcoming Lok Sabha polls. He also put stress on various relatable issues of the state politics which in turn gave the ruling BJP-IPFT government major setback.

What are the main issues for the CPIM in these elections as far as poll campaigning is concerned?

For the CPIM, there three main issues for these elections—defeat the Fascist and Communal Modi government, increase the number of CPIM members in the parliament and instate a secular government in the Centre. And we are very much hopeful that we will be able to do that.

Recently, the tribal politics of the state took a hasty move of unrest with the demands of NRC, CAB and other, how would you like to comment on the issue?

There is no such word like “tribal politics”. Politics is an inclusive thing which should tend towards development of every community---Tribal, Hindu, Bengali, Sikh, Christians and so on. But, as it is in Tripura, CPIM is the lone party that tried its level best to maintain the integrity of the state. Time and again the separatist political outfits took shelter of the anti-left powers and whenever the emergence of such powers took place a disorder in state politics is being witnessed. Starting from the period of “Shenkerang”, the tribal electorates are being used as a tool of grabbing power from the Left. Later on, TUJS was formed. They also introduced themselves with a brand new slogan— “Kaichak Koofor Cgung-Chia, Buni Tala Tanglia” (“We are neither reds nor whites, but we stand for tribal causes”) but they also merged with the Congress. In the 80’s a new slogan of “Independent Tripura” rocked the state which influenced huge number of tribal youth towards extremism and ended by forming a coalition government in the 1988 that too with the Congress which is considered to be the worst of all for the tribals. And, now we have seen how the IPFT with their demand of “Twipraland” came forward and become a part of the incumbent government. This shows how the people with vested interests repeatedly misled the tribal electorates towards violence and extremism. The Left government, in all aspects, stands the best which never gave such powers any opportunity to fancy their chances.

Chief Minister Biplab Kumar Deb repeatedly alleges that the CPIM is trying to mislead the people of the state. Even with the MGNREGA, it is being alleged that due to CPIM’s misconducts people are in trouble with “Geo-Tagging” system. How do you like to react on that?

First of all, Chief Minister Biplab Kumar Deb should come down to his flying-chariot (Helicopter). Only then he could be able to understand the troubles of people. And, in terms of “Geo Tagging” I would like to advise the government to understand the system first. If a road is constructed under rural development scheme a “Geo Tagging” is being carried out around a certain radius of the road. But due to natural calamities, every time such roads get washed away. In the last flood, many ponds and lakes dug up under rural schemes got filled. Now, if a new “Geo Tagging” is done it will show that an asset has been created here. What does it mean? In no means, the previous government could be made responsible for this.

The state is all set to witness a multi-corner contest in the next elections. All the regional parties including the IPFT and also the BJP and Congress are in the fray. Do you think CPIM could win the elections in such a scenario?

Of course, the CPIM is winning the elections. If you ask why, I would say, in the last assembly elections, the Left Front faced a united power of anti-Lefts. All the parties who are against the CPIM or the Left came under the same banner. But, now the scenario is different. This disassociation as you are witnessing will blow the victory call for the Left.

In the national level, the CPIM is supporting the Congress but in Tripura there are no such pre-poll arrangements. Is not it a double standard game?

What has happened in the national level is an issue based adjustment with the Congress in order to intimidate the BJP from coming back for another term. And as far as state politics is concerned, there is no need for such arrangement. In the last assembly elections, the Congress party had a very little presence in the ballot. They got near about 1.8% votes, very negligible count in comparison to the CPIM. Rather, the Congress should support CPIM as it is the question of their existence.