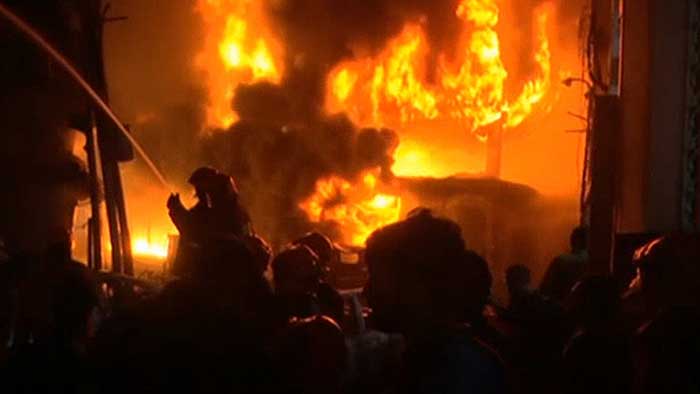 Seventy people, including four children and five women were confirmed dead on Thursday while 56 were reported injured in a massive blaze in the Bangladesh capital that engulfed several multi-storey buildings in the Chawkbazar area of the old city.

The fire began in one building from a reported transformer blast, before spreading to at least seven-eight other buildings. Police said Bangladesh Air Force helicopters had to be used to douse the flames, Dhaka Tribune said.

According to the Fire Service Control Room, 37 units from 31 stations worked for five hours to douse the blaze that started at 10.35 pm in a chemical unit in the Haji Wahed Mansion at Nanda Kumar Lane in Chawkbazar's Churihatta.

Muradul Islam, officer-in-charge (investigation) of Chawkbazar police station, said 67 bodies have been kept at the morgue. Of which, 58 are men; five women and the rest of them are children. He said so far, they have been able to identify only 19 victims.

The injured were being treated at Dhaka Medical College Hospital (DMCH) and Mitford Hospital.

While visiting the spot, Home Minister Asaduzzaman Khan Kamal told the media that the fire has been brought under control completely. Road, Transport and Bridges Minister Obaidul Quader also visited the spot in the morning.

According to Dhaka Medical College Hospital (DMCH) registrar a total of 56 people were treated at the hospital.

Dhaka Metropolitan Police (DMP) officials said the fire spread rapidly due to the multiple chemical godowns that were situated in the area.

The devastation was so huge that the mansion housing a warehouse of plastic products appeared to have tilted around 1.45 a.m., the media report said.

A Fire Service Control Room official Mahfuz Riben confirmed: "We have so far recovered all 69 bodies." An hour later one more body was recovered.

The death toll in the devastating inferno will rise, warned fire officials, who have been working throughout the night to douse the devastating blaze that first broke out in a three-storey building situated at the intersection of roads leading to Rahmatganj, Churihatta and Chawkbazar areas.

"Our priority right now is to douse the fire completely and tend to the wounded," Dhaka South City Corporation Mayor Sayeed Khokon said.

Khokon and MP Haji M. Salim who had rushed to the spot, however, did not respond to questions about the warehouses in the buildings in Old Dhaka where chemicals are kept in unsafe conditions.

Wednesday night's fire reminded many Old Dhaka residents of the Nimtoli fire tragedy that took place barely one kilometre from the spot on June 3, 2010 and killed at least 124 people.

In the last nine years though there has been little progress made in addressing the issues that led to the Nimtoli fire, or many smaller subsequent fires that took place, the media report added.