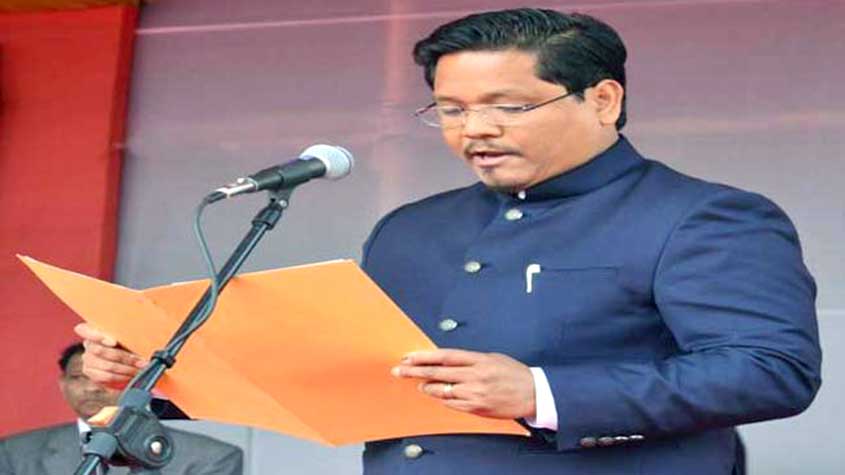 Governor Ganga Prasad administered the oath of office and secrecy to the 40-year-old Tura Lok Sabha member, who was projected as the leader of the Meghalaya Democratic Alliance (MDA) coalition.

Conrad Sangma is a non-elected member of 60-seat Assembly. He has to get elected to the Assembly within six months.

On Monday, the HSPDP expressed reservation in forming the government with the BJP and also objected to Sangma being projected as the Chief Minister.

"Each member has the democratic right to express an opinion... But their (HSPDP) legislators are very much with us, they have expressed their opinion and both are here with us," Conrad Sangma told journalists.

The new Chief Minister urged his coalition to work together as a team to ensure that Meghalaya made rapid progress.

Outgoing Chief Minister Mukul Sangma was present on the occasion and mingled freely with BJP leaders.

Among those who were sworn in includes Conrad Sangma's elder brother James Sangma besides three former Congress ministers -- Prestone Tynsong, Comingone Ymbon and Sniawbhalang Dhar -- who were elected to the Meghalaya Assembly as NPP members.

The NPP, which won 19 assembly seats in the just ended polls, is the second largest party after the Congress which won 21 seats.

Meghalaya is the third state after Manipur and Goa where the Congress could not forge a post-poll alliance with any of the regional parties despite emerging as the single largest party.

Reacting to former Chief Minister Mukul Sangma's description of the MDA government as a "bundle of contradiction", Conrad Sangma admitted that running a coalition would always be a challenging task.

"If we say there is no challenges, then we are running away from the truth. We have to face those challenges. As a collation partner we need to communicate and respect each other. Therefore, it is my duty and responsibility to carry everyone along," he said.

The Congress tried to retain power in Meghalaya by sharing power with the regional parties.

"We offered ... either the UDP should lead the government or share power for two-and-a-half years. But UDP President Donkupar Roy said this could have been discussed much earlier," Mukul Sangma said.

He added: "Congress has the wherewithal to create a turnaround in any situation."