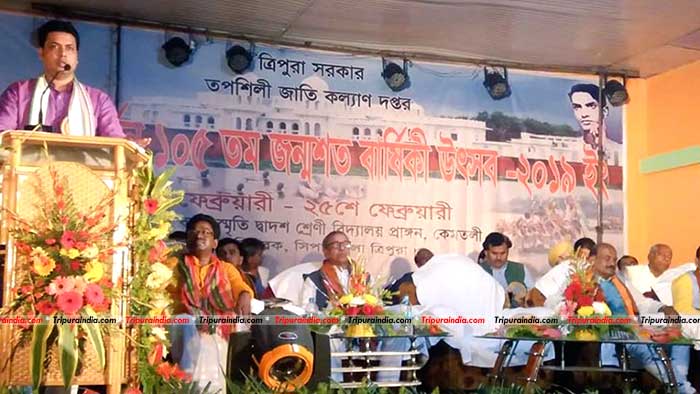 Describing different initiatives of State Government for the people of SC, ST and OBC section he said the state government has taken different steps for economic development of farmers and fishermen in the state.

Referring the eminent novel of Mallabarman “Titas Ekti Nadir Naam” on life of fishermen Chief Minister said, the writer wanted progress of their society through economic development of fishermen. Criticizing the previous government for suspending development of backward section, schools and work culture in last 35 years he said, the present government brought back work culture at schools and offices breaking the conventional culture.

Referring 2 lakh free gas connections provided in the state during the rule of present government he said, “the number is highest among the North Eastern states.” He also mentioned about spending Rs. 842 crore under Atal Jaladhara Mission out of allotted Rs.1800 crore.  Deb said, target has been fixed to reach drinking water connection to all houses by 2022.

He also described the initiative of state government to develop tourism, fishery and agriculture to generate income in the state and appealed to come forward to make the state best in the country.

On the occasion Professor Dr. Prahalad Roy from Viswa Bharati University said, the writer worked relentlessly for the welfare of fishermen community.

Among others MLA Subhash Chandra Das, Speaker Rebati Mohan Das, Chairperson of MMC Uttam Das were present on the occasion.