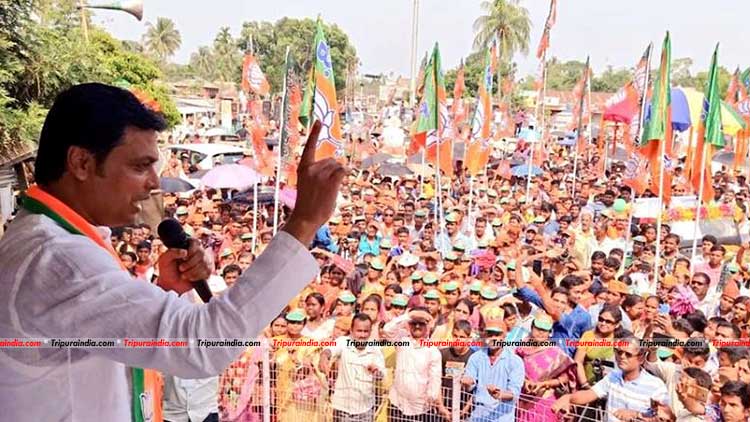 Speaking on the occasion, he said, BJP is a party with difference. This party gave me a chance to serve the people of the state. And now it is time for Rebati Tripura, the son of the soil, to get elected from here and be the voice of yours in the parliament.

Coming down heavily on the CPIM he said, for last 25 years we have heard of protests and protest nothing rather than that but now you can see how the situation has changed. Nobody is there to disturb the people of Tripura, without no protest 7th pay scale was given, social pension allowances were increased, people of Tripura were facilitated with other centrally funded schemes, he added.

But, he continued, there are people who do not want to see Tripura free and peaceful. A new slogan was brought to forefront—“Puila Jati Ulo Party” as a part of a well concerted conspiracy. People have seen how a president of national party slapped an innocent Youngman in the police station. People of Tripura will never let them on the loose. They will give a befitting reply from them on the 23rd of May, the Chief Minister claimed.

CM Deb also kept on saying, none of the actors who are involved in hatching conspiracy against this government will be spared and people of Tripura will never let the go they have give answers for their deeds.

Meanwhile, huge number of BJP supporters took the streets today along with the Chief Minister. Slogans of “Bharat Mata Ki Jay” and “Modi once again” were claiming the air. Local MLA Kalyani Roy and other party leaders also partook in the campaigning.

Notably, Chief Minister Biplab Kumar Deb for last two days held more than 10 public meetings and road shows in the area. The frequent strikes of political activities in the area is claimed to be due to increasing force of Congress in the rural pockets. The East Tripura Parliamentary constituency is scheduled to go for polls on May 23 next and it is all set to witness a triangular fight between Congress, CPIM and BJP.