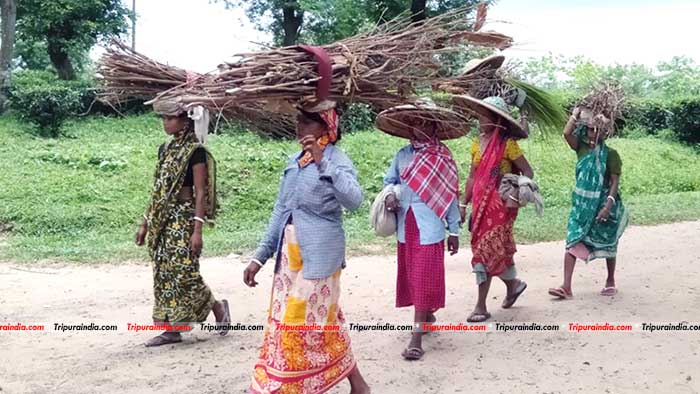 The north-eastern state Tripura is basically depends on agriculture and the Economic Review of Tripura reveals that Tripura is primarily an agrarian State, with about 42% of the population depending on agriculture and allied activities. However, only about 27% of the land is cultivable, rest being hilly and forested. Rice is the major crop in the State.

The agricultural activities are more or less depending on environment and the climatic condition is also related with agricultural activities. The geographical isolation of the State has seriously hampered the development process of the State, the climate condition of Tripura in terms of long rainy season result in very limited working season of 4-6 months. The combined impact of these factors is that projects take longer time to complete and costs increase substantially.

It has also reported in the Economic Review of Tripura that the rubber and tea plantation activities have a special socioeconomic significance in rehabilitation of shifting cultivators. Acording to report a total of 56 tea gardens are here in Tripura and these are located at Sadar, Khowai, Kailashahar, Kamalpur, Dharmanagar, Sabroom and Belonia area. The state Tripura is covering an area of 6712.43 hectares for tea garden. Tea of the state has good blending qualities. The production of bio-tea, which does not have any chemical residue, has been taken up as special venture.

According to the literature reviews it has to be noted that tea plays a meaningful role in rural development, poverty reduction and food security in case of developing countries and it is one of the most important cash crops in the world. Climate change is an important environmental issue and impacts very badly tea in case of production as tea is mainly grown under rain-fed mono-cropping systems and weather conditions determine optimal growth. The effects of climate change on the tea economy and the mitigating measures that should be adopted are not yet well understood.

The present story is being published as part of IHCAP-CMS Media Fellowship Program and it has observed that the tea production is labour intensive, and the tea industry provides jobs, especially in rural area, economically depressed rural areas. Tea trade and distribution are dominated by a few international and national companies that benefit from stable retail prices. Although there have been found in Tripura that at around 12 thousand people directly or indirectly depend on tea garden and doing there as a labour with an amount of wage only Rs. 105  per day.

According to report Statistical Abstract 2016 published by Directorate of Economics & Statistics Planning (Statistics) Department Government of Tripura, Agartala that the temperature of the state Tripura increased at 390C in 2014 from 340C in 1995 and the temperature is increasing day by day here in the state Tripura. The trend of increasing temperature is the reason of climate change and it is very badly affecting the tea garden and agricultural production of Tripura.

Joydeep Ganguli, Manager of Fatikcherra Tea garden has informed that a total of 125 labours are here who are doing as wage laborer and get payment in week and this company produces organic tea and tea of their company exports to foreign country Japan and others state. In course of conversation, Mr. Ganguli has said that the climate change is a big issue and this issue is seriously hitting on tea production. Tea production adversely affects due to change in climate change because high temperature is not suitable for tea production.

“A good or appropriate temperature is very important to get the appropriate flavor of tea and the tea of Darjeeling is better than others because of temperature. Tea gardens are very badly affected in the state Tripura because the impact of climate change adversely effects the tea production”, said Dr. B.K Kandpal.

Sudip Majumder, Chief Executive Officer and Founder of Bagma Agri Producers’ Development Trust guided by NABARD in Tripura has admitted it that the climate change has been affecting the agricultural production in Tripura. He said,” Tea is such type of agricultural production where it is very important to maintain good temperature otherwise it affects the production level and it is affecting economy of the state Tripura”.

A section of economists of Tripura believe it that the impact of climate change is very dangerous for Tripura economy because the economy of Tripura depends on agricultural production and a good numbers of labour will lost their job in near future. The economy of the state Tripura will be affected more and more in future.