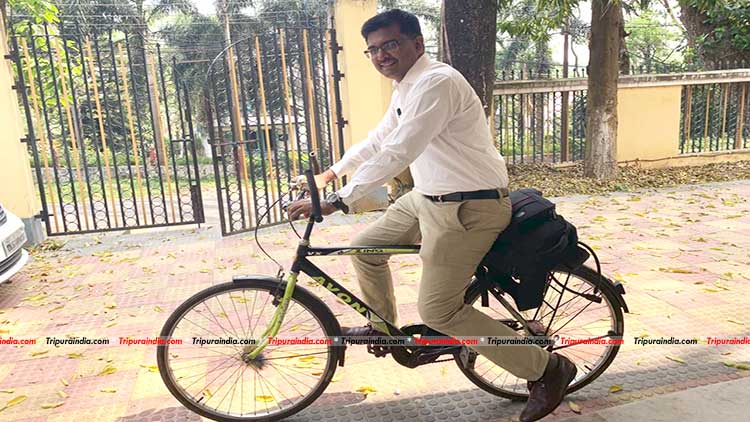 In an exceptional of its kind attempt to promote cycling at personal interest, a highly decorated IFS (Indian Forest Service) officer, S Prabhu, holding the chair of DCF (Forest Protection), started using By-cycle as a medium of his conveyance for office from last week. Now every day, he cycle near about two kilometers to reach his office from his Shyamalibazar residence. In his office, where almost all the employees even the group D staffs have their own two wheeler now observe their boss coming office riding a by-cycle.

In an exclusive interaction with the Tripuraindia.com, Prabhu revealed, “In 2014 I visited Japan for a training programme. You would never believe, almost everyone in the country do cycling. All of them are fit and active in their respective fields of work. I had seen people cycling for 10 to 15 kilometers to reach their offices and then come back in the evening. You will find no other vehicles in the roads of Japan rather than bicycles and cars. After coming back the first thing I did—brought a bicycle”

The love for cycling, he added, is not a new thing for me. Since my childhood, I have witnessed my grandfather and grandmother using bicycles for everyday work and both of them were blessed with hassle-free long life. But, later I also witnessed my father, my uncles switching to motorcycles or to other automated vehicles which exposed them to a number of diseases—Diabetes, Kidney related problems and many more. Moreover, their life span was also reduced distinctly, he claimed.

While asked about the response he gets of his move, he enthusiastically replied, after the first couple of days of starting, the higher authorities called on me and inquired after the matter and when they understood there is nothing serious, I am doing it as a medium of exercise they did show no objections.

When asked of the message he wants to spread with his move, he told the correspondent, for me it’s like going gym every day. It gives me relief from every day stress. But, yes it is true that Agartala is an ideal place for cycling. Justifying his words, he continued, in two to three kilometers of radius you will get everything—shopping malls, markets, offices and all the day-to-day necessities. Moreover, cycling will help people fighting diseases like diabetics, kidney related problems, cardiac-vascular diseases and the degree pollution will also decrease, he pointed.

He also urged the government for separate cycle tracks along the city roads to encourage youngsters towards this venture. “Every year the number of vehicles, motor cycles are increasing. The level of pollution is also touching the sky day-after-day. If the government undertakes initiatives to promote cycling in the city the entire scenario of Agartala will be changed in just few years. It will also reduce the out of pocket expenditure of the city dwellers. One time investment of Rs 4,000 will give lifelong service.” He concluded.