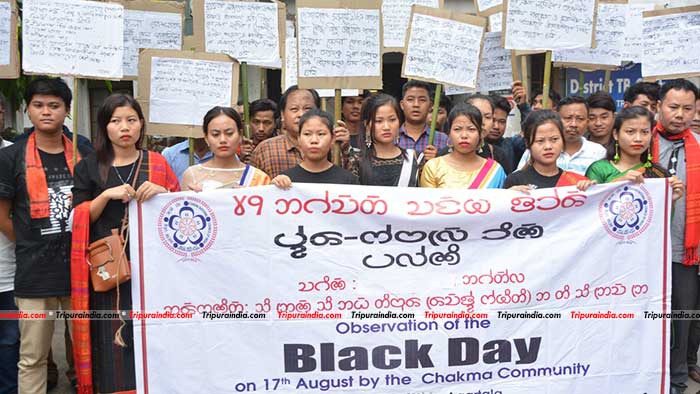 The Chakma tribals of northeast India and Chittagong Hill Tracts (CHT) of southeast Bangladesh on Saturday observed a "Black Day" to protest the non-inclusion of non-Muslim dominated CHT in India during the partition in 1947, a leader of the agitating tribe said.

CNCI Assistant General Secretary Shanti Chakma told the media in Agartala that the Chakma people in CHT (of Bangladesh) are also observing the "Black Day" through numerous functions. Comprising three districts -- Bandarban, Khagrachari and Rangamati -- around 800,000 Chakma tribals are living in the mountainous region, bordering India and Myanmar.

"Besides, in important cities of India -- Kolkata, New Delhi, Mumbai, Bangalore -- the day was observed with the initiative of the migrant Chakma students and the Chakma people living there," Shanti Chakma said.

To observe the "Black Day", the tribals held rallies, seminar, demonstrations and other events.

He said that despite huge protests and ignoring the repeated appeals of the Chakma people, the Bengal Boundary Commission headed by British lawyer Cyril John Radcliffe announced the inclusion of 98.5 per cent non-Muslim dominated CHT with the then East Pakistan (now Bangladesh).

The CNCI leader said: "Nehru Ji (former Prime Minister Jawaharlal Nehru) once publicly acknowledged in the aftermath of the partition of the country, that moving the CHT to East Pakistan was a grave mistake. If Nehru ji's remorse was true and sincere, then in his lifetime why did he not raise this issue in the international forum and why he did not arrange for remedy?"

Another Chakma leader Romel Chakma said that both in erstwhile East Pakistan as well as in present Bangladesh the tribal population (mostly Buddhist with some Hindus) in CHT have been suffering immensely.

"With forced and government-sponsored resettling of the Muslim population from the plain lands by successive Bangladesh governments the tribals who constituted 98.5 per cent of the population in 1947 have now been reduced to a minority. Their land is being taken away, people are being killed and tortured frequently while womenfolk are also being persecuted very often," he claimed.