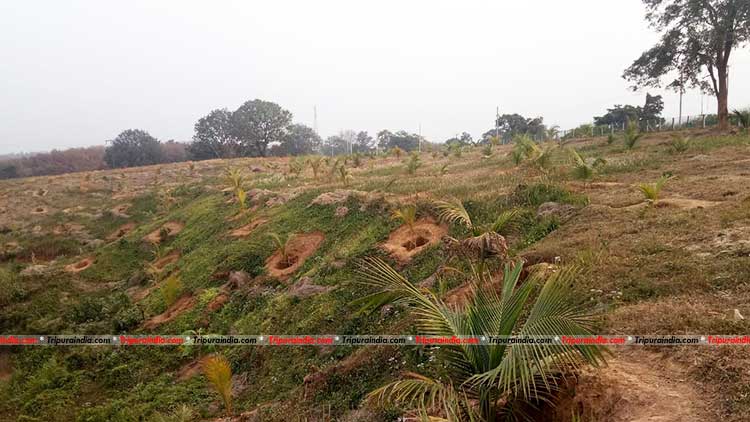 The Tripura counterpart of Coconut Development Board which once fastened its activities in the state owing to the phase of insurgency has now once again started its new venture at Hichachara, a hundred kilometer journey from here, in order to boast up state's economy with profitable coconut plantation.

The plantation which begun half and a year back at a land plot of 50 Acres is eyed to inter 2,500 plants of 13 varieties of coconut, highly productive in nature. And if the projects completes as it planned to be, it will produce one Lakh highly productive seeds as well as a total fruit collection of two and half Lakh, highly demanding in nature, will be on the cards.

There are altogether 13 variants of coconut that will be planted in the piece of land allotted by state agricultural department located in the South Tripura District at the very skirts of National Highway 8, a place which is very ideal and known for its richness in the spectrum of agriculture.

Speaking to us, one of the highly placed official of the board based at Kerala, not willing to disclose his Identity said, it is a golden opportunity for the state and it’s rural population to take advantage of such a project. This centrally funded project is designed to uplift farmer’s income through offering quality training and seeds. And of course the loamy and sandy soil of the state with adequate rainfall defines it as a fancied location for all the 13 varieties.

Drawing his concern over the productivity, he said, already the plantation of 6 species has been done such as Assam Tall, Malayali Orange and some of the yellow ones which are likely to start giving fruits within 4 to 5 years of planting. There are 4 species in the Nursery too which are also very productive. Some of the other are gradually arriving the state and the deadline of plantation is retained the first half 2020.

“If the entire plantation come to an end-destined to 2,500 plants in total out of which 600 is just completed, it would take 7 years to take the orchard as a full-fledged one”, He added excitedly.

Asked of the procedures as how the farmers would take the advantage, he replied, farmers or whoever is enthusiastic over coconut cultivation could collect the seeds in exchange of a negligible price which will garner great profit in mere 4 to 5 years. This will surely act as a money spinner, an alternative of rubber or tea too, claimed he.

Notably, it is the second such venture in the North East after Assam, where a hundred Acre settled down farm is creating buzz of huge business for locals. Moreover, Chairman of the Board Raju Narayan Swamy is also likely to visit the farm this month for an inspection, added the sources.