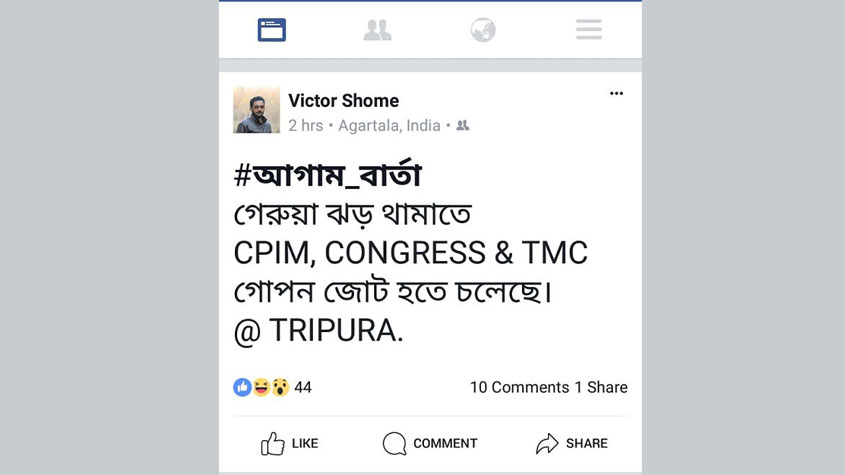 When the 5 much hyped MLAs of the Pradesh Trinamool Congress are struggling hard enough to meet the Prime Minister Narendra Modi and BJP President Amit Shah at Delhi, the BJP state Tripura Committee's social media post of alliance among the CPI-M, Congress and the TMC goes viral today.

The BJP media in-charge Victore Shome today posted in a social media - "Advance announcement, the CPI-M, Congress and TMC are going for an alliance in wake of 2018 poll."

However, this has triggered a serious panic among a section of much hyped leaders of different political parties.

It is worthy to memtion here that the five Trinamool MLAs who had defected from Congress in May last year have been trying to join upcoming BJP in Tripura before the next assembly elections slated to come off in February next year .

Since there was no response from the state BJP unit the five MLAs, Biswabandhu Sen, Sudip Roy Barman, Asish Saha , Pranjit Singha Roy and D.C. Hrangkhwal left for Delhi last week to meet Modi and Shah for directly joining BJP at the central level. But their attempt has fallen through as it was made clear to them that unless they went through BJP`s state unit neither Modi nor Amit Shah would meet them.

The five MLAs, frustrated with the Calcutta based central Trinamool leadership, are holding a meeting with Tinamool's all India general secretary Mukul Roy in the latter's official residence.

Four of the five MLAs are expected to return to Agartala tomorrow but Sudip Roy Barman will stay back in Delhi to make a last-ditch effort to meet either Modi or Amit Shah. Sources said that Dilip Sarkar who had been virtually forced to join Trinamool along with the group of five headed by Sudip Roy Barman could not go to Delhi on account of illness.