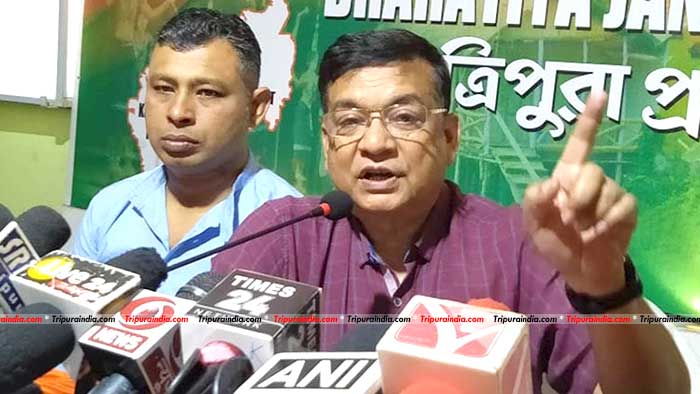 The Bharatiya Janata Party (BJP) today ruled out the opposition CPI-M's allegation of 'corrupt practise' over Tripura High Court's cancellation of the supply order of life-saving drugs for cancer patients of the state from a Mumbai-based pharma company - Reliance Life Science Private Limited, which was found under-qualified to supply such medicines. Addressing a press conference Mr. Sinha talked tough on the opposition CPI-M party which according to him has simply maligned the government in the name of 'corrupt practise'.

"The allegation is baseless as the government was aware of the invalid papers of the Reliance Company which was supplying the order as per the tender rate," he said.

"Not ignoring to the objections brought by the BIOCON over some papers of the Reliance saying it does not have requisite documents and experience of supplying life-saving drugs and is improper, the government has immediately formed a committee with the drug inspectors to verify the papers," adding to this Mr. Sinha today explained, "The two members' committee of Maharastra has found the papers improper and submitted the report with the government."

He said, "But this did not probe government's indulgent in any corrupt practise as was alleged by the opposition CPI-M party as the HC has not found any corrupt practise of the government here, rather the government is directed to continue procuring the medicines from the company as usual until the other company - BIOCON which objected Reliance's papers negotiate with the rate of procurement and starts supplying the order of life-saving drugs for cancer patients in the state."

The high court order said BIOCON should negotiate rates with the health department and supply the medicines at not higher than 10 per cent of the rates at which Reliance Life Science was supplying the drugs.