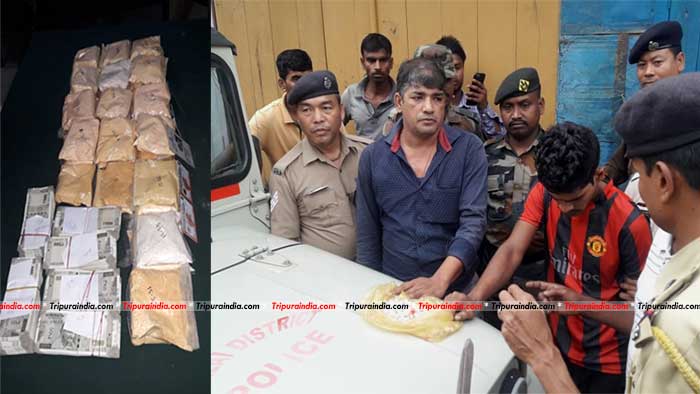 Tripura police has on today seized Brown Sugar worth one crore after being tipped off during a random vehicle checking drive at Ambassa subdivision of Tripura.

Reportedly, police detained a motor cycle and arrested two persons identified as Khukan Debnath and Rupan Debnath. Initially, police recovered two pouches of suspected brown sugar from their possession. Both of them were brought to the police station and subjected to interrogation.

Later on, police team under the supervision of executive magistrate conducted a search operation at Bhuban Debnath’s residence.

Sources in the police informed two medium size barrels were found hidden under the ground. A total of 490 grams of brown sugar equally pegged in 32 pouches were recovered from the barrels along with cash of rupees 5 lakh 34 thousand 5 hundred.

SDPO Amabassa Asish Dasgupta said, “It is the biggest recovery of all time in Ambassa. We have arrested three people in connection with the case - Rupan Debnath, Khukan Debnath and his wife Rita Debnath. Investigation is on and we will nail each and everyone connected with this nexus. Khukan and Rupan Debnath were arrested during the vehicle checking drive and Rita Debnath was arrested during the search operation.”