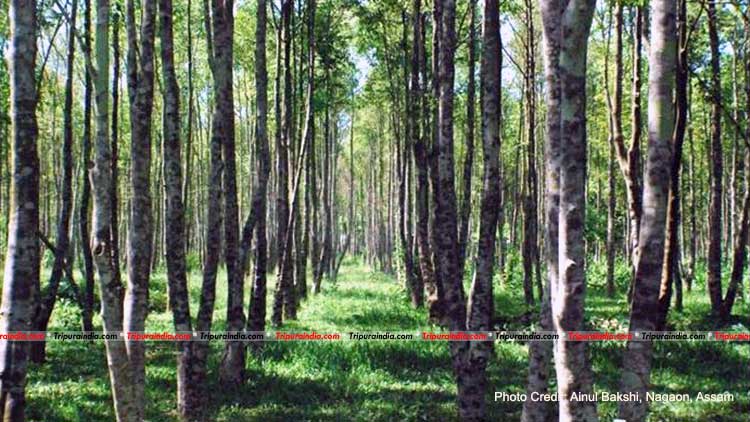 Aquilaria malaccensis Lam. Syn. A. agallocha Roxb. (Thymelaeceae) is a resinous tree and commonly known as agar. The tree is distributed in South and South East Asia from the foothills of the Himalayas to the rainforests of Papua New Guinea.

In India, Agar tree (Aquilaria malaccensis) is distributed in all the Northeastern States. Agar tree is a natural component of the evergreen and semi-evergreen forest flora of the NE region. However, it is now rarely seen in such habitats because of over-harvesting and indiscriminate felling. It prefers a subtropical climate with high humidity and rainfall range of 1800-3500 mm and requires a reasonable amount of sun and well drained soils but will grow in a plantation situation with some shade from other longer rotation species. It is found in natural forests at an altitude of a few meters above sea level to about 1000 meters, however, it grows best around 500 meters.

Agar tree is a medium size evergreen tree attaining a height of 15-40 meter and diameter of 0.6- 2.5 meters. The plant has a straight bole, but may become fluted. The wood is soft, light, elastic and white to yellowish-white in colour. Leaves are oblong-lanceolate with undulating margin and up to 9 cm long. Flowering occurs during April-May and seeds mature in about three months. Multiplication of the plant is through seeds, which have a short viability period.

Agarwood has been prized as incense from ancient times. It is traded in several forms, ranging from large sections of trunk to finished products such as incense and perfumes. Agarwood chips and flakes are the common traded forms. The major constituents of Agarwood oil are sesquiterpenes, the chemical structure of which makes them very difficult, hence extremely expensive, to synthesize. Although synthetic Agarwood compounds are used to produce poor-quality fragrances and incense sticks, there are currently no synthetic substitutes for high grade incense or oil.

Agarwood cannot generate aromatic resin in healthy wood tissue. It is an induced resinous product of wounding due to herb ivory, wind chill or fire damage and subsequent opportunistic infection by facultative fungal pathogens. The first process of olio-resin production is taken in cells of the included phloem, rays, parenchyma para-trachea and trachea. It is the tree’s response to injury if its first line of defense, formation of phloem callus tissue, is inhibited forming over the injury.

Agar oil and agaru or agarwood are the most exalted perfumery raw materials obtained from the infected wood of agar tree. The agar oil known in the East as agar-attar is one of the perfumery’s oldest materials. It is considered one of the costliest perfumery raw materials used in high-class perfumery and fixative, imparting a lasting balsamic odour to the product and is much priced in international market for mixing it with quality perfumes.

The use of Agarwood oil for perfumery extends back several thousand years. In India various grades of Agarwood are distilled separately before blending to produce attar (scent). Minyak attar is a water-based perfume containing Agarwood oil, which is traditionally used by Muslims to lace prayer clothes. Agarwood essences have recently been used as a fragrance in soaps and shampoos.

Agarwood has also been used for medicinal purposes for thousands of years, and continues to be used in Ayurvedic, Tibetan and traditional East Asian medicine. Agarwood and its products are described as aphrodisiac, alternative, anodyne, antidiarrhoeal, antiasthmatic, astringent, carminative, cordial, diuretic, laxative, stomachic and tonic and incorporated into the preparation of several pharmaceutical and cosmetic products.

According to a grower in Assam “In NE region, except Arunachal Pradesh the Agar tree is regulated by the State Forest Departments. A grower has to go through various legal formalities for obtaining no objection certificate before harvesting Agarwood, whereas, in Arunachal Pradesh, Agar is considered as a horticultural crop. A farmer can harvest them just like agricultural crops with minimum legal formalities. This benefits the growers and generates revenue for the state”.

Agar oil is an export-oriented product and the demand is very high in the international market. The large gap in the demand/supply situation is due to the scarcity of raw materials, lack of favorable policy and schemes, and also due to lack of infrastructure and machinery for extraction of oil.

A lot of scope is available in Tripura for promotion of Agar farming on farm boundaries and fringe areas. The state govt. is also giving much emphasis to promote the industry of Agarwood processing and extraction of oil for its trade from the state.