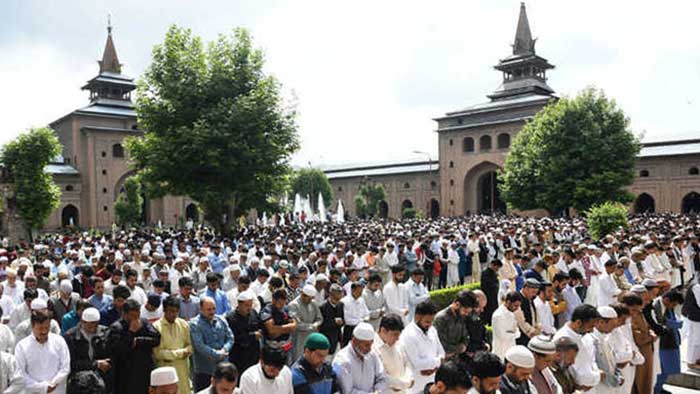 The historic jama mosque in Srinagar re-opened for prayers for the first time on Wednesday after the revocation of Article 370 on August 5.

The call for mid day prayer (Zuhr) suprised the residents living around the area.

The grand mosque was first cleaned by the mosque authorities - Anjuman-e-Auqaf - headed by Mirwaiz Umar Farooq, who also heads a faction of Hurriyat Conference.

The mosque officials also checked the sound system before call for prayer emanated from the minarets.

Since August 5, no prayers were held at the mosque.

"We decided to clean the mosque today (Wednesday) and conducted Zuhr and Asr(afternoon) prayers for the first time after August 5," said a senior Auqaf member.

A volunteer said that there is a lot of dust in the prayer mats. "We are clearing the masjid before offering Zuhr prayers," he said.

"This place is our spiritual Centre. We missed the aura and ambience that this masjid offers to people since August 5. Thank God, this place is again open for worshippers," said Mohammad Sultan, a resident of Gojwara in Srinagar.

Some 150 odd worshippers were present for Zuhr prayers at the historic masjid.

The Auqaf committe has decided to hold congregational prayers on Friday in the mosque.

"If all goes well, there will be Friday congregational prayers at the historic masjid on the coming Friday," a member of Auqaf committee said.

Jamia mosque was caught in a tussle between Auqaf and the security forces after restrictions were imposed on holding prayers following removal of Article 370 on August 5.

Security officials had been saying that there were no curbs for holding prayers since last month while Auqaf had been maintaining that prayers won't be held until security forces are removed from all gates and masjid surroundings.

Jamia mosque was built in 14th century and since then it has been an important spiritual centre in Kashmir.

The mosque has also been the heart of separatist politics in Kashmir for long.