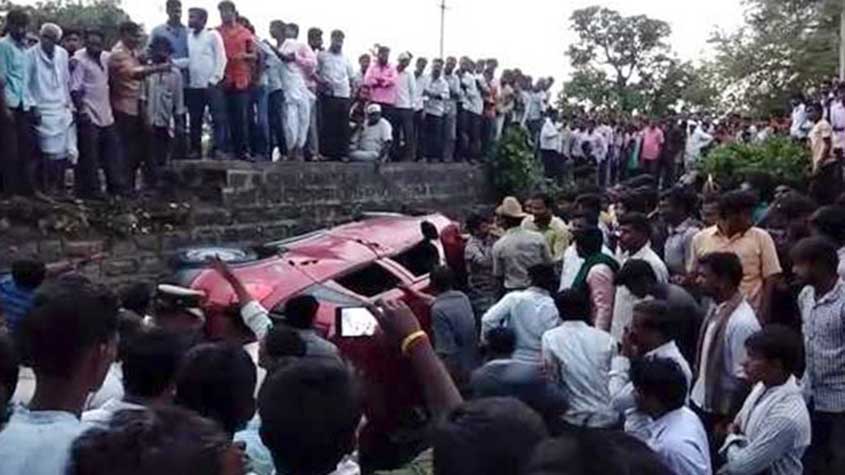 A long drive on his weekly day off along with a relative and friends proved to be deadly for Mohammad Azam, a software engineer who was beaten to death by a mob in Karnataka's Bidar district on Friday on suspicion of being a child lifter.

A pall of gloom has gripped the house of Azam, 28, in Errakunta in the old city of Hyderabad.A

The body of Azam, who was working with Google, was brought to the city late Saturday and was buried at a graveyard near his house. Three friends of Azam, who were injured in the mob attack, were admitted to a private hospital in the city. They include Salham Eid Al Kubasi, a Qatari national and a friend of Azam who was on a vacation to India.

The family of Azam, a father of a two-year-old child, is seeking justice.

His brother Mohammad Akram, also a techie, urged the Telangana government to take up the issue with the Karnataka government for a proper investigations into the incident.

"The guilty should be punished so that no other innocent loses his life in this manner," said Akram.

He recalled that their cousin Noor Mohammad, Salham, Mohammad Salman and another friend came to meet Azam on Friday. "They left the house around 11 a.m. We did not know that they were going out of the city," said Akram.

It was a pleasure trip for the friends, who enjoyed the outing in the countryside. Relatives of Azam say they stopped at a hamlet and were taking pictures.

Slaham saw a group of children returning from a school. As he was carrying chocolates brought from Qatar, he offered it to few children out of affection.

When some people saw strangers including a foreigner offering chocolates to children, they mistook them to be child lifters. They started questioning them. Sensing trouble, the group left the place in their car.

However, few residents of the hamlet alerted people of nearby village Murki over their mobile phones.

At Murki, a mob chased the car and forced it to stop. The mob dragged out the occupants and started beating them with sticks and stones. After some time, police rushed to the spot and dispersed the mob.

While Azam died on the spot, others sustained critical injuries. Two of them were battling for life at a hospital in Hyderabad.

"We are software engineers. Do we look like child lifters," asked Akram, who fails to understand why the mob did not believe their clarifications. The young man wants the governments to take some serious action to stop lynching over rumours being spread through WhatsApp.

More than 20 people have been killed across India over rumours in the last few months.