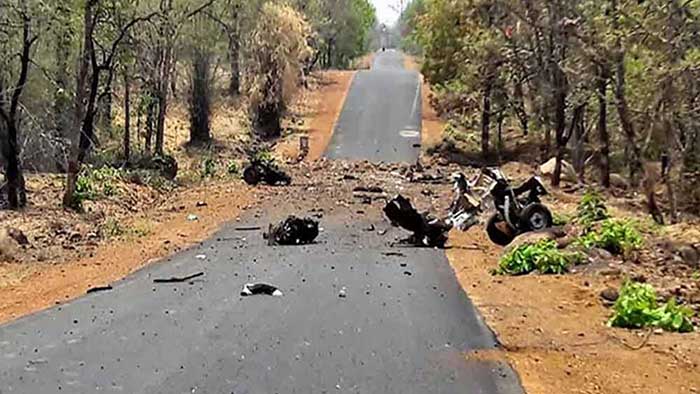 Maoists struck in a big way on Wednesday, killing 15 commandos and a civilian by triggering a landmine blast targeting a security vehicle in Gadchiroli district of Maharashtra.

The attack on the security vehicles came hours after the suspected Maoists torched at least 36 road construction vehicles and two site offices of a road building contractor in Gadchiroli's Dadarpur village.

Significantly, the Maoists carried out the attack in Khurkheda tehsil when the state was celebrating its Foundation Day.

According to official sources, the commandos of elite C-60 force of the Maharashtra police were proceeding to a place where Maoist activities were reported and were confronted with fallen trees blocking an isolated road in a forest area.

When they alighted to clear the road of the trees, the blast took place, killing the commandos instantly, the sources said.

Director General of Maharashtra Police Subodh Jaiswal said a security vehicle, carrying 15 personnel, was hit by a landmine blast and a civilian vehicle also got caught in it.

"The saddest part is that we have lost 15 of our men… Whatever is to be done, will be done," he told a press conference in Mumbai.

C-60 is a quick reaction force.

The state police chief asserted that the attack will not deter the forces from continuing their operations against the naxals and vowed to give a "befitting reply".

"We will revisit the entire thing and see whatever is to be done… Our operations will continue with full force. We have the capacity to give a befitting reply,"

"We have the capacity to handle this," Jaiswal said, adding "Our effort is to ensure nothing of this sort happens in the future."

He said it won't be right to say that the incident happened because of intelligence failure but investigations will be conducted to see how it occurred.

"Whatever needs to be done, will be done," the DGP said.

Maharashtra Finance Minister Sudhir Mungantiwar told the media that it is "a massive tragedy" coming on the day when the entire state is celebrating Maharashtra Day.

"Anguished to know that our 16 police personnel got martyred in a cowardly attack by Maoists today. My thoughts and prayers are with their families. I am in touch with the (police) DGP and Gadchiroli SP," Fadnavis said.

Mungantiwar said that the Maoists are "angered by the highest turnout in Gadchiroli-Chimur Lok Sabha constituency" in the recent 2019 parliamentary elections which has prompted these violent reactions.

All parties, including ruling ally Shiv Sena and the Opposition condemned the attack on the security forces.