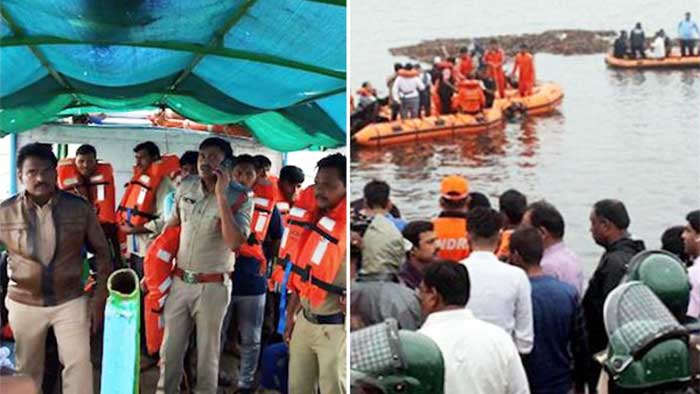 A pleasure trip turned into tragedy for many families as a boat with over 60 tourists capsized in swollen Godavari river in Andhra Pradesh's East Godavari district on Sunday, killing 12 persons while at least 30 went missing.

As many as 27 passengers either swam to safety or were rescued by people from a nearby village.

Six teams of fire fighting personnel with eight boats were also participating in the rescue work.

"A specialized deep divers team with Side Scan Sonar equipment from Uttarakhand is landing at Vijayawada by tomorrow (MondaY) for retrieving bodies from river," said an official statement on Sunday night.

The boat was carrying 63 tourists and nine crew members.

Majority of those on the boat were from Telangana. Officials said 22 of the tourists were from Hyderabad and 14 from Warangal.

Negligence by the private boat operator led to the tragedy as the boat was operated despite floods and in violation of safety guidelines of the Tourism Department.

Survivors complained that the driver appeared untrained and had the crew had no training in deal with the emergency.

Andhra Pradesh Chief Minister Y.S Jagan Mohan Reddy expressed his shock over the tragedy. He directed the officials to carry out rescue operations on a war-footing.

He asked them to use NDRF teams, besides pressing into service Navy and ONGC helicopters in the rescue operations.

The Chief Minister also ordered all the available ministers in the district to rush to the scene and supervise the rescue work.

He directed the officials to suspend all boating services immediately in the region.

Jagan Mohan Reddy announced ex-gratia of Rs 10 lakh each for the families of the dead.

As reports suggest that boat was being operated without license, Reddy asked officials to check for the licence of the boats and if adequate training was given to the staff or not.

The Chief Minister sought a complete report on the incident and directed framing of safety guidelines by an experts committee.

Telangana Chief Minister K. Chandrasekhar Rao also expressed his grief over the tragedy. Since there were people from Telangana among those dead, he instructed officials concerned to take the necessary action.

He also announced Rs 5 lakh ex-gratia for the next of kin of the dead.

"Extremely pained by the capsizing of a boat in Andhra Pradesh's East Godavari. My thoughts are with the bereaved families. Rescue operations are currently underway at the site of the tragedy," he said in a tweet.

Modi posted another tweet in Telugu, calling the incident "traumatic".